Olafur Eliasson‘s installation in the Turbine Hall of the Tate Modern: 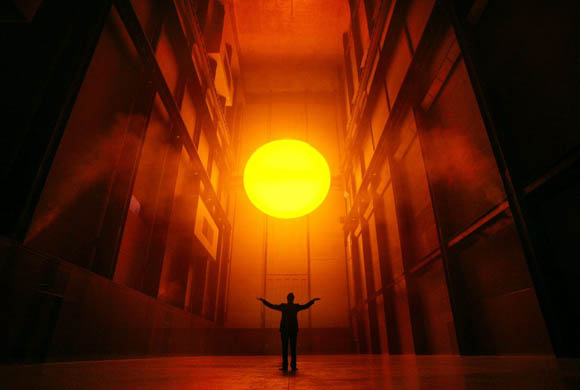 “In this installation, The Weather Project, representations of the sun and sky dominate the expanse of the Turbine Hall. A fine mist permeates the space, as if creeping in from the environment outside. Throughout the day, the mist accumulates into faint, cloud-like formations, before dissipating across the space. A glance overhead, to see where the mist might escape, reveals that the ceiling of the Turbine Hall has disappeared, replaced by a reflection of the space below. At the far end of the hall is a giant semi-circular form made up of hundreds of mono-frequency lamps. The arc repeated in the mirror overhead produces a sphere of dazzling radiance linking the real space with the reflection. Generally used in street lighting, mono-frequency lamps emit light at such a narrow frequency that colours other than yellow and black are invisible, thus transforming the visual field around the sun into a vast duotone landscape.”
Text from Tate

Colombian artist Doris Salcedo is the first Latin American to be invited to work in the Turbine Hall of the Tate Modern. In her piece Shibboleth, which was her response to this invitation, she draws attention to issues of racial intolerance and segregation. The title of the piece, “Shibboleth” is an essential hint to understanding Salcedo’s intentions and is explained in this passage from the Bible:

“Therefore Jepthah gathered all the males from Gilead, and warred against Ephraim, and the Gileadites defeated Ephraim […] and occupied the margins of the Jordan, through where Ephraim’s people would have to pass on their return. And some of them arrived there and prayed to be let through, they asked him, Aren’t you from Ephraim? And as he answered, No, I am not, they replied: Then, say “shibboleth,” which means wheat spike […] And they pronounced it “sibbolet,” as they were unable to pronounce the same letters […] and were beheaded […] so that forty thousand men from Ephraim died in that war”. (Judges 12,4-6)

Shibboleth is a Hebrew word with multiple meanings, wheat spike, river, and olive branch, but beyond that it is a symbol of a strong cultural identity, since knowing how to pronounce it can indicate belonging or exclusion, or in the case of the biblical story, it can mean life or death. Being the first Latin American artist to be invited to work in the Turbine Hall, Salcedo felt strongly about making a piece which represented her personal perspective as a Third World person in the First World. Salcedo created a huge crack in the floor of the Turbine Hall. Breaking, penetrating, and invading the space. She said, “I think the space defined by the work is negative space, the space that, ultimately, Third World persons occupy in the First World” (Doris Salcedo, October 9, 2007). The work reveals a division that many people would rather ignore, an abyss between two worlds that do not touch and is a comment on the right wing European’s insistence that immigrants represent the loss of cultural heritage. Salcedo’s violent and bold action of creating a crack in the floor of the Tate Modern creates an impact on the viewer and leaves an important message, and even when the crack is filled there is a scar to show that this struggle continues.