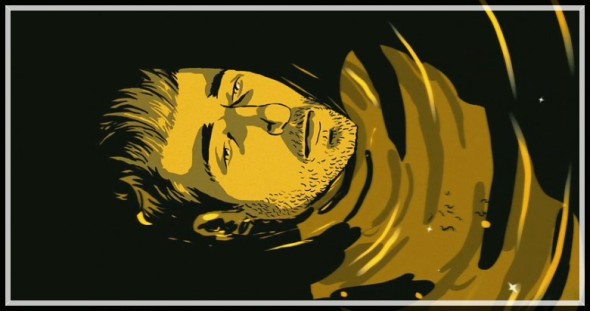 Just watched a wonderful animated film, Waltz with Bashir. It’s a kind of autobiographical documentary about the experience of the director, Ari Folman, who, realising that he has no recollection of the Lebanese War in which he fought, decides to search for his memories.

Folman is haunted by an image of him and his comrades emerging from the sea after a massacre, but he doesn’t know if this “memory” is real or fabricated. He speaks to his psychologist friend Ori Sirvan to try to understand how to separate the tangle of fantasy and reality in his memory, his friend tells him about a famous psychological experiment where a group of people were shown 10 various childhood photos. Nine were really taken from their childhood, depicting real experiences that actually took place, but one picture was fake: their portrait was pasted into a picture of a fairground they never visited. Eighty percent recognized themselves in the picture, identifying the fake photo as real. The other 20 percent that couldn’t remember themselves in the fake picture, went home, and then returned to the researchers and said, ‘now we remember!’ … They remembered a completely fabricated experience.

Folman tracks down his old comrades and speaks to them about the war. Though many of them are suffering from the same willed amnesia as Folman, they tell him the few memories that still haunt them, but its’s hard to tell if their “memories” are real or imagined. Folman puts the pieces together and gradually starts to uncover his repressed memories.

I have my own curious experience with lost memory: I was about 6 years old and on a trip somewhere in Venezuela with my family. We were in a somewhat deserted place and stopped in a small restaurant for dinner, we were there eating when a drunk man with a gun walked in. He was talking drunken nonsense and waving his gun around, he came to our table and was talking to us and I started to laugh, I was scared and nervous I suppose, but I couldn’t stop, which made me more scared, which made me laugh even more! Anyway in the end he left without hurting anyone and everything was fine. The strange thing is this memory is very vivid in my mind but my Mum, Dad and brother have no recollection of it. So did I imagine it or did they forget it?

This makes me think of a nice line from Milan Kundera‘s The Book of Laughter and Forgetting:

“Whoever wishes to remember must not stay in one place, waiting for the memories to come of their own accord. Memories are scattered all over the immense world, and it takes voyaging to find them and make them leave their refuge.”