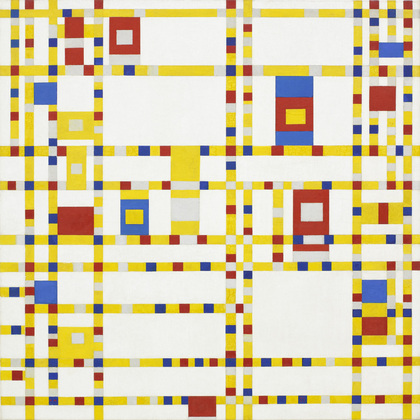 Mondrian, who had escaped to New York from Europe after the outbreak of World War II, delighted in the city’s architecture. He was also fascinated by American jazz, particularly boogie-woogie, finding its syncopated beat, irreverent approach to melody, and improvisational aesthetic akin to what he called, in his own work, the “destruction of natural appearance; and construction through continuous opposition of pure means—dynamic rhythm.” In this painting, his penultimate, Mondrian replaced the black grid that had long governed his canvases with predominantly yellow lines that intersect at points marked by squares of blue and red. These atomized bands of stuttering chromatic pulses, interrupted by light gray, create paths across the canvas suggesting the city’s grid, the movement of traffic, and blinking electric lights, as well as the rhythms of jazz.

Zeus himself could not undo the web
of stone closing around me. I have forgotten
the men I was before; I follow the hated
path of monotonous walls
that is my destiny. Severe galleries
which curve in secret circles
to the end of the years. Parapets
cracked by the days’ usury.
In the pale dust I have discerned
signs that frighten me. In the concave
evenings the air has carried a roar
toward me, or the echo of a desolate howl.
I know there is an Other in the shadows,
whose fate it is to wear out the long solitudes
which weave and unweave this Hades
and to long for my blood and devour my death.
Each of us seeks the other. If only this
were the final day of waiting. 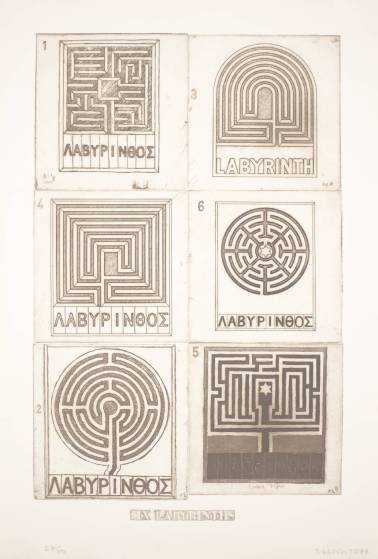