Life Without You proposes a layout of shells from exotic places as the desolate emptiness of lost love. Hirst has said that he likes shells ‘because they once contained life’; this aspect of them is paramount for him. However, although he is presenting a landscape of dead husks, they have already been transformed, through varnishing, into a range of attractive consumable objects, leading to the suggestion, in Life Without You, that the abandoned subject may find consolation elsewhere. The grid in this work is compromised by its variations and exceptions, perhaps allowing some hope despite the bleakness of the implied end. In comparison to works made by Schwitters using found pebbles, a feather and shell, such as Symphony for a Poet, 1940, its collage of humble objects suggesting melancholy and contemplation, Hirst’s table arrangement appears upbeat, clean and colourful, if a little sterile. The aesthetics and tactics of advertising have become central characteristics of Hirst’s work: Life Without You anticipates his later use of them to reinterpret traditionally poetic subjects (love, loss, life, death) in a new language of contemporary art that fuses minimalism, pop and the cult of the commodity.

Cildo Meireles was born in Rio in 1948 and grew up in a time of oppression and social turmoil. Thus he began his career as an artist by making subtle protest pieces challenging Brazil’s military dictatorship. Later on he became known for his sumptuous large-scale installations which are a roller coaster to the senses. In his installations Meireles allows the audience to interact with the artwork, hold it, feel it beneath their feet, hear it, smell it, and taste it.

In his installation, Volatile, Meireles uses scent to cause fear. Volatile consists of a darkened room, divided in half by a wall, whose floor is covered in a thick layer of talcum powder. The smell of gas permeates the air, or rather T-butyl-mercaptan, the scent artificially added to natural gas so that deadly leaks can be detected. Around the corner, at the end of the adjacent room, sits a single candle lit up and creating an eerie and faint glow across the room. The scent of gas in itself causes panic in the viewers but the addition of fire creates an even greater sense of fear and tension, the room is volatile and could explode any minute. Meireles transforms the spectator into an active participant and subject of the wicked game, associating perversity and seduction within the same object. Meireles admits that he enjoys playing with people’s fears, saying that “when you have fear, your senses become heightened. You become more attentive to your environment.”

Meireles’ initial idea for Volatile was to have a candle in a bell jar inside a space filled with gas. Meireles liked the idea of giving the power of existence to the viewer. Let them answer the question ‘to be or not to be’. As he explained it, “it’s as if I had hung the hammer of reason and you, the spectator, made your decision”. But eventually the idea progressed to this final version where the true degree of danger involved is removed and the power is transferred to Meireles.

In this final version, visitors are instructed to remove their shoes and socks, roll up their trousers and proceed to open the door and enter the dark room (only four people are allowed in the room at one time). The dry powder feels cold, sludgy, and even wet against the skin, and walking through it gives the surreal sensation of walking on a cloud or across the moon. The stimulation of multiple senses allows a heightened sense of self awareness and deeper connection with one’s environment.  Our senses are in conflict, the smell of gas instills fear while the exciting feeling of the talcum generates pleasure. Although many people consider Volatile to be in solidarity with the Jews, referring to the gas chambers of the concentration camps, Meireles himself does not see it in tragic terms. To him it is an entirely pleasurable experience, like walking in the clouds, and, as he describes it, “an attempt to associate sensation and emotion, producing an almost instantaneous link.” 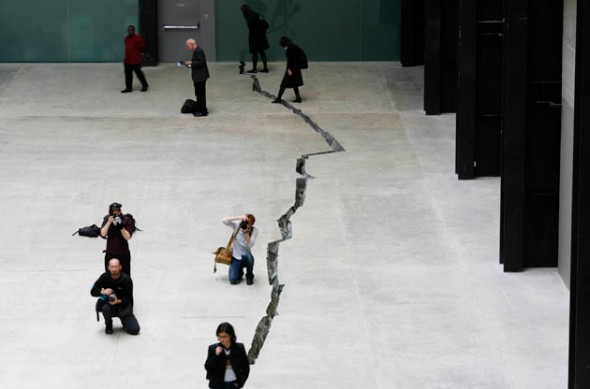 Colombian artist Doris Salcedo is the first Latin American to be invited to work in the Turbine Hall of the Tate Modern. In her piece Shibboleth, which was her response to this invitation, she draws attention to issues of racial intolerance and segregation. The title of the piece, “Shibboleth” is an essential hint to understanding Salcedo’s intentions and is explained in this passage from the Bible:

“Therefore Jepthah gathered all the males from Gilead, and warred against Ephraim, and the Gileadites defeated Ephraim […] and occupied the margins of the Jordan, through where Ephraim’s people would have to pass on their return. And some of them arrived there and prayed to be let through, they asked him, Aren’t you from Ephraim? And as he answered, No, I am not, they replied: Then, say “shibboleth,” which means wheat spike […] And they pronounced it “sibbolet,” as they were unable to pronounce the same letters […] and were beheaded […] so that forty thousand men from Ephraim died in that war”. (Judges 12,4-6)

Shibboleth is a Hebrew word with multiple meanings, wheat spike, river, and olive branch, but beyond that it is a symbol of a strong cultural identity, since knowing how to pronounce it can indicate belonging or exclusion, or in the case of the biblical story, it can mean life or death. Being the first Latin American artist to be invited to work in the Turbine Hall, Salcedo felt strongly about making a piece which represented her personal perspective as a Third World person in the First World. Salcedo created a huge crack in the floor of the Turbine Hall. Breaking, penetrating, and invading the space. She said, “I think the space defined by the work is negative space, the space that, ultimately, Third World persons occupy in the First World” (Doris Salcedo, October 9, 2007). The work reveals a division that many people would rather ignore, an abyss between two worlds that do not touch and is a comment on the right wing European’s insistence that immigrants represent the loss of cultural heritage. Salcedo’s violent and bold action of creating a crack in the floor of the Tate Modern creates an impact on the viewer and leaves an important message, and even when the crack is filled there is a scar to show that this struggle continues.

The Transient Art of Cai Guo-Qiang

While some works of art have survived thousands of years others are as fleeting as a shooting star. A master of the ephemeral, Chinese artist Cai Guo-Qiang uses the sky as his canvas and gunpowder as his paintbrush in his staged firework performances which can take place in day or night. 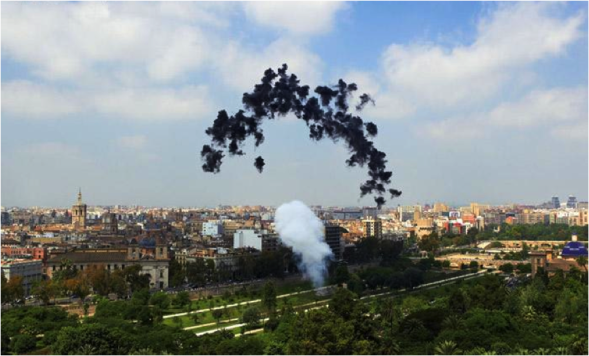