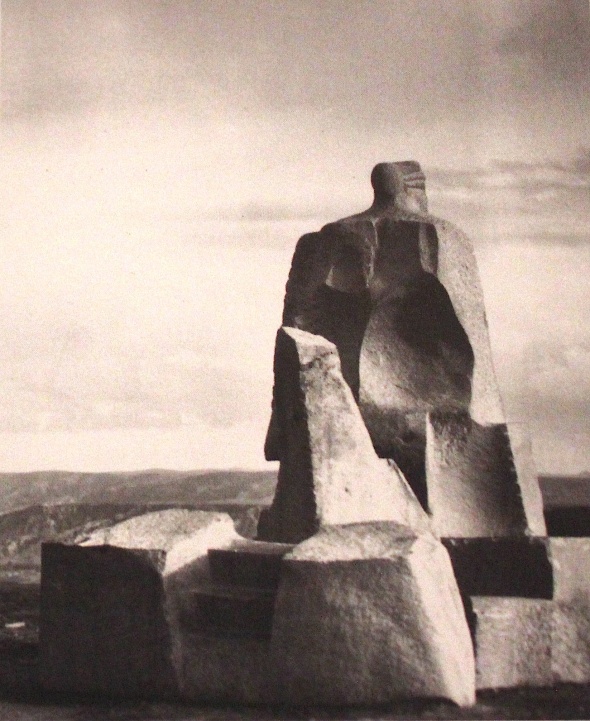 Society, as we have constituted it, will have no place for me, has none to offer; but Nature, whose sweet rains fall on unjust and just alike, will have clefts in the rocks where I may hide, and secret valleys in whose silence I may weep undisturbed. She will hang the night with stars so that I may walk abroad in the darkness without stumbling, and send the wind over my footprints so that none may track me to my hurt: she will cleanse me in great waters, and with bitter herbs make me whole.

Ted Carrasco is a Bolivian sculptor inspired by nature and especially by his native Andes. For him the powerful Andean landscape is a symbol of life and his work explores man’s relationship with it. In his sculpture Andes (1988) he depicts the Earth goddess Pachamama, the sensuous embodiment of nature itself. From this photograph it’s hard to make it out, but it is supposed to represent Pachamama as “a reclining woman-mountain with an altar on her belly, her genitals serving as a doorway to the secrets of life.” I would love to see it in the flesh and stare for a good while. It’s a bit far, but a great excuse to go to North Korea!

De Profundis is a letter written by Oscar Wilde in 1897 while he was in prison, the title refers to a latin prayer, a cry of appeal expressing one’s deepest feelings of sorrow or anguish. In the letter he describes his spiritual growth during his imprisonment and writes about his relationship with Lord Alfred Douglas and the extravagant lifestyle which led to his imprisonment for gross indecency.

Just like Ted Carrasco’s sculpture, this extract from Oscar Wilde’s De Profundis is also inspired by the relationship between man and nature, written at a time of immense physical and emotional hardship when he turned to nature and spirituality for relief. Two beautiful and evocative works of art.