Once again we share some of the highlights from the Swab International Contemporary Art Fair, Barcelona. There were many fantastic artists to discover, here are our top five finds, in no particular order:

Galería Alegría represented Juan Escudero within the programme of Drawing Applications. Born in Bilbao and currently based in Barcelona, Juan Escudero’s drawings are simple, yet incredibly detailed, and form part of his series Piel (Skin). In them he explores the act of drawing a line and the natural wave and forms which can emerge naturally from that action. Using india ink, the artist draws line after thin line upon the paper, creating the effect of waves and textures from their varying closeness. They are abstract and process-lead drawings in which you can get lost and imagine different possibilities, one of which could be that they detail the relief of a landscape, like a topographic map.

Presented under Solo Swab, a programme curated by Direlia Lazo and Carolina Ariza which presents individual Latin American artists whose work is of a procedural and documentary nature. Estefania Peñafiel Loaiza, an Ecuadorian artist based in Paris, exhibited a fascinating project. In her piece Untitled (Extras), 2009-2014, the artist used an eraser to remove the bodies and faces of anonymous people found in newspapers. She collected the eraser residue of each individual and stored them separately in tiny glass vials. Presented are a few of the newspapers, in which we can see large blurred areas where she has erased, a display case filled with hundreds of glass vials, arranged and labeled like scientific specimens, and a list which documents each person erased (the newspaper and date they were taken from) and links it to the corresponding vial. A tribute to the “extras” in our everyday life and a reminder of the many things that go unsaid, unnoticed, or unrecognized. Galerie Alain Gutharc was awarded the prize for Best Art Gallery at Swab 2015, sponsored by the Fundació Banc Sabadell. 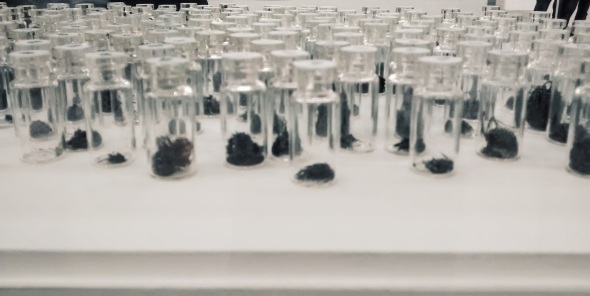 Shown within the Swab Seed programme, curated by David Armengol and representing independent spaces dedicated to contemporary art, Salón presented a compelling exhibition of ceramics. Based on a text from Gulliver’s travels, the project explores the physicality of language, playing with ways of representing words as objects, giving shape to a gesture or a vocal cord. Teresa Solar Abboud, for example, materialised sign language by moulding her clay based on the gestures, spelling out words like “chicken” by putting together the shapes imprinted by her hands when forming each letter. The objects were arranged on a shelving unit, and moved around each day and combined in different ways, creating new dialogues and connections every time. 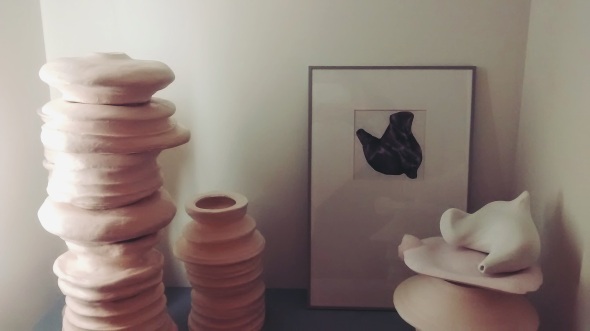 Galería Silvestre had a fantastic booth inside the Swab General Programme with many wonderful artists and an inspired presentation. While I enjoyed all their proposals, the highlight was discovering these three painters. Luisa Jacinto has a way with colour and brushstrokes, her paintings transmit a kind of serenity while retaining a sense of mystery which keeps the viewer wondering what is happening on the canvas. Germán Portal‘s paintings have a surreal edge. His large and striking painting, Figura al Sol,is clearly inspired by Picasso’s Nude Standing by the Sea, but in Portal’s version the figure is a structure made from cardboard templates. In this humorous series, Vanguardismo DIY, he questions the aura and glorification around certain works of art and artists. Gloria Martín‘s paintings are simple but contemplative and clearly thought-out. She takes everyday objects and visions and by virtue of the attention she shows them, she gives them an importance, turning them into mysterious and meaningful objects. 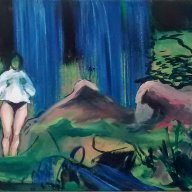 3k Art is an online art platform which participated in the fair within the MYFAF programme of young galleries. What stood out the most in their stand was the work of Spanish photographer, Javier Ayuso. His series Walking Around (Sucede que me canso de ser perro) draws its inspiration from Pablo Neruda’s eponymous poem in which he reflects on the uncertainties and absurdities of existence and says “it so happens that I’m sick of being a man”. In his photographs Ayuso explores these concerns from the point of view of his dog, captured in moments where he appears almost human. Ayuso draws parallels between human and animals behaviors –encouraging the viewer to reflect upon the animal qualities which can perceived in human behavior as much as the human qualities seen in animals.

See more of their work in Swab:

Swab is an art fair dedicated exclusively to young emerging artists – most of the programmes within the fair are restricted to artists aged 45 and under. This year the fair presented 65 galleries from 22 countries, including Spain, Mexico, Cuba, Japan, Greece, and many more.