“When I was small and would leaf though the Old Testament retold for children and illustrated in engravings by Gustave Doré, I saw the Lord God standing on a cloud. He was an old man with eyes, nose, and a long beard, and I would say to myself that if He had a mouth, He had to eat. And if He ate, He had intestines. But that always gave me a fright, because even though I came from a family that was not particularly religious, I felt the idea of a divine intestine to be sacrilegious Spontaneously, without any theological training, I, a child, grasped the incompatibility of God and shit and thus came to question the basic thesis of Christian anthropology, namely, that man was created in God’s image.”
From The Unbearable Lightness of Being by Milan Kundera

The above quote brings to mind the highly controversial photograph by American artist Andres Serrano, Immersion (Piss Christ), which depicts a small plastic crucifix submerged in a glass of the artist’s urine: 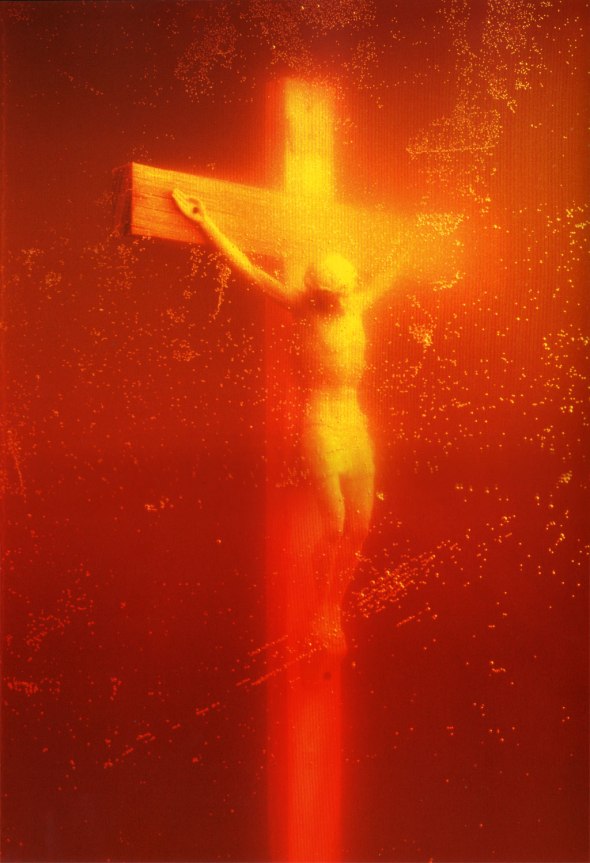 Nude Standing by the Sea 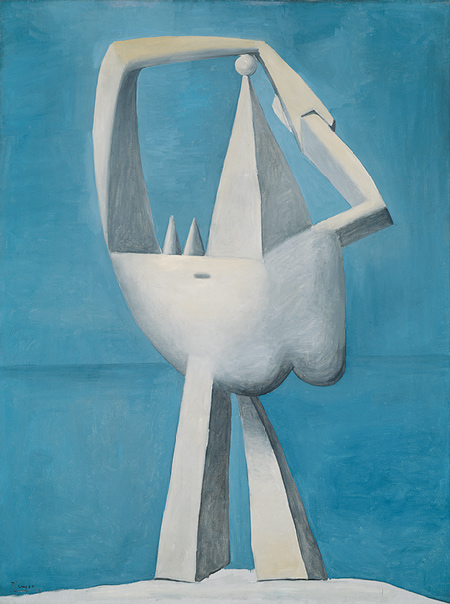 Although never an official member of the Surrealists, despite Breton’s efforts to coopt him, Picasso nevertheless participated in many of their exhibitions and activities in Paris. His work between 1926 and 1939 has been called surrealist because of its fanciful imagery and sexually charged motifs, but despite many shared features, Picasso’s desire to interpret the real world was at odds with Surrealism’s imaginary inner-generated visions.

Here, he was inspired by bathers on a beach that he had previously sketched, painted, and sculpted in Cannes (1927) and Dinard (1928). In these earlier works, as in this 1929 painting, Picasso ultimately transforms the human figure into a strange mutated being, part geometric masonry, part inflated balloon. The features of the female physique metamorphose into one another—the rounded buttocks also suggesting breasts, the pointed breasts suggesting sharp teeth, and the horizontal slit, a reference to both navel and genitals. The overall effect is conflicted, showing both monumentality and vulnerability, sensuality and cold detachment, as if two different sensibilities inhabit this figure. Such imagery may have been a reflection of the artist’s own anguished love life at the time. Married to Olga Khokhlova since 1918, he had been having an affair with a beautiful young teenager, Marie-Thérèse Walter, since the summer of 1927, which would last through the 1930s.

Text from The Metropolitan Museum of Art, NY

The Dessert (Harmony in Red) by Henri Matisse. 1908 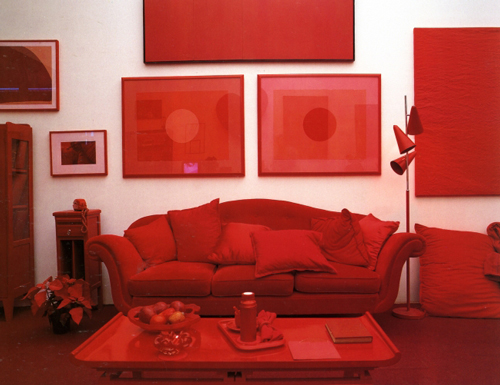 The red-room was a square chamber, very seldom slept in, I might say never, indeed, unless when a chance influx of visitors at Gateshead Hall rendered it necessary to turn to account all the accommodation it contained:  yet it was one of the largest and stateliest chambers in the mansion.  A bed supported on massive pillars of mahogany, hung with curtains of deep red damask, stood out like a tabernacle in the centre; the two large windows, with their blinds always drawn down, were half shrouded in festoons and falls of similar drapery; the carpet was red; the table at the foot of the bed was covered with a crimson cloth; the walls were a soft fawn colour with a blush of pink in it; the wardrobe, the toilet-table, the chairs were of darkly polished old mahogany.  Out of these deep surrounding shades rose high, and glared white, the piled-up mattresses and pillows of the bed, spread with a snowy Marseilles counterpane.  Scarcely less prominent was an ample cushioned easy-chair near the head of the bed, also white, with a footstool before it; and looking, as I thought, like a pale throne.

This room was chill, because it seldom had a fire; it was silent, because remote from the nursery and kitchen; solemn, because it was known to be so seldom entered.  The house-maid alone came here on Saturdays, to wipe from the mirrors and the furniture a week’s quiet dust:  and Mrs. Reed herself, at far intervals, visited it to review the contents of a certain secret drawer in the wardrobe, where were stored divers parchments, her jewel-casket, and a miniature of her deceased husband; and in those last words lies the secret of the red-room–the spell which kept it so lonely in spite of its grandeur.

Mr. Reed had been dead nine years:  it was in this chamber he breathed his last; here he lay in state; hence his coffin was borne by the undertaker’s men; and, since that day, a sense of dreary consecration had guarded it from frequent intrusion.

From Jane Eyre by Charlote Brontë